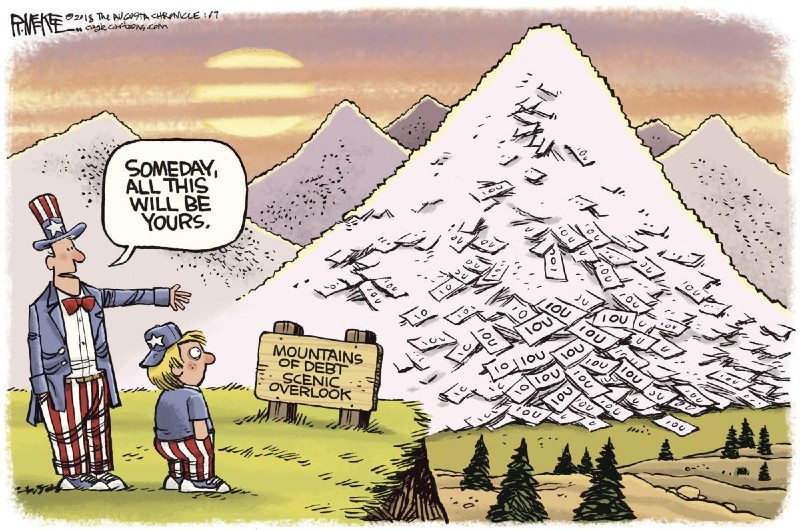 Is a mountain of public debt that worrying?

The latest data on US government borrowing are very impressive. The Federal deficit in April alone was $738 billion. For the first four months of 2020 the red ink amounts to $1.13 trillion, equivalent to the annual GDP of Florida. As a consequence, the ratio of US debt-to-GDP is ballooning, leading some observers to issue dire predictions for the future.

The current situation, however, calls for a more nuanced view.

First, from a methodological point of view, the ratio of debt to GDP is odd, if not flawed. It divides a stock, national indebtedness, by a flow, annual gross domestic product. Surely, what also matters is the ability to pay, which is a function of interest rates. In 1993 Italy’s debt-to-GDP ratio was lower than it is today, but it was saddled with interest rates of 12%. Today, it pays less than a 2% annual interest rate.

Consider another example. According to the OECD, US general government gross financial liabilities were equal to 108% of US GDP at the end of last year. Meanwhile, another advanced economy has a debt burden more than twice as large as a per cent of its GDP—Japan at 225%. Yet Japan pays almost 0% to borrow, meaning that its debt service costs are also negligible. The OECD reckons that last year Japan’s general government net interest payments accounted for 0.000005% of its GDP. Meanwhile, debt service swallowed 3.1% of US GDP in 2019.

The point is simple. At (super) low interest rates, debt is more affordable and more of it is sustainable for longer.

Of course, this happy state of affairs requires that sovereign yields remain rock bottom. Hence, the decisive issue is that yields will have to stay unusually low for a protracted period. That may be possible, but it almost certainly implies a commitment to financial repression—in other words, a tax on savers.

In response to the pandemic and its economic fallout, central banks have revived programs of ‘quantitative easing’ in sizes unimaginable just a few months ago. During the first four months of this year the Fed bought $1.6 trillion worth of Treasuries, which exceeded US Treasury issuance in that same period.

It is worth stepping back and taking a look at the Fed’s impact on overall debt servicing cost. At the end of last year, the Fed owned approximately 10% of total outstanding US Federal debt. That proportion is already above 15% and climbing. The Fed’s annual transfer to the US Treasury represented roughly 8% of total 2019 debt service. De facto, about one tenth of US federal debt is therefore held at an effective zero interest rate. Moreover, for now it is also essentially perpetual debt, as the Federal Reserve will probably roll over its holdings as they mature.

One key implication is that economists, policy makers and market participants should view government debt on a consolidated basis, removing the share of the debt held by the central bank, barring the unforeseen case where that debt is sold into private hands.

At the same time, inflation also bears watching. For many reasons, it may take time for inflation to accelerate. For instance, economic activity may remain subdued for longer. Still, the Federal Reserve and other central banks are effectively monetizing national debt. And although monetary links to inflation have been weak to non-existent in recent decades, it is difficult to imagine that the sheer size of monetary creation won’t one day boost inflation. Indeed, with prevailing inflation rates and inflation expectations below most central bank targets, lifting inflation is a core aim of monetary policy in many countries. Inflation might also pick up if supply-constraints owing to the pandemic and national policy responses create shortages as demand recovers. Still, central banks are likely to tolerate modest increases in inflation, meaning that taxpayers will continue to benefit from their largesse for longer.

What is the bottom line? National debt levels are high and racing higher. In the very long run, most of that debt will have to be serviced out of rising income. But for a considerable period of time, ‘financial repression’, abetted by the actions of central banks, will keep debt servicing low, despite massive increases in the stock of debt. Consolidated national debt accounting provides a more accurate picture of what burdens taxpayers truly face in the coming years. They are not as high as the gross figures suggest, which is a good thing, insofar as battling the pandemic, addressing its economic costs and ensuring adequate preparedness for future outbreaks require significant and ongoing increases in national indebtedness. Financial repression can ensure that fiscal expansion works and will not be prematurely and harmfully reversed.

227 Responses to A Mountain of Debt

Shifting human behaviors to more sustainable outcomes can be informed by the targets we set for ourselves. Quality, not quantity, is the promise for today’s and future generations. END_OF_DOCUMENT_TOKEN_TO_BE_REPLACED

The recent weakening of the US dollar can be explained by near-term market forces rather than any epochal shift. END_OF_DOCUMENT_TOKEN_TO_BE_REPLACED

Flagging growth, depressed earnings, the risk of rising Covid-19 infection rates and unprecedented US election risk are forces that not even the Federal Reserve may be able to offset. END_OF_DOCUMENT_TOKEN_TO_BE_REPLACED