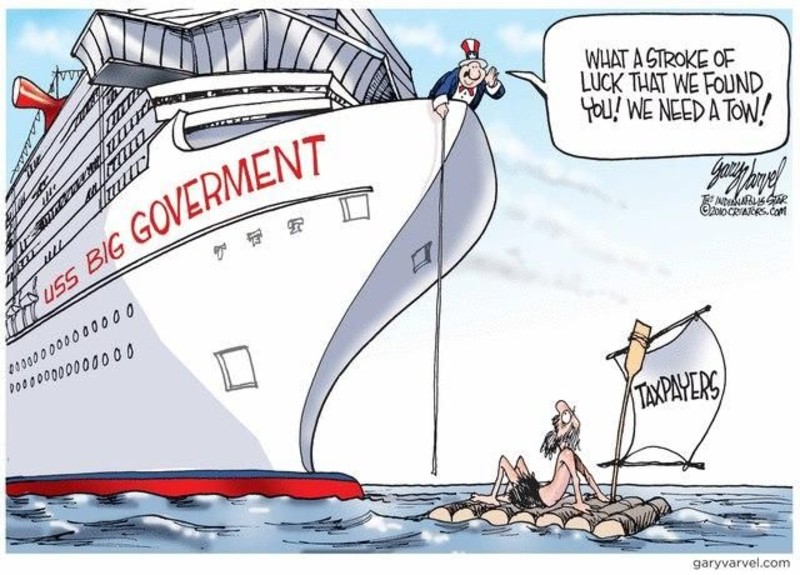 The COVID 19 crisis has put government back at the center of things in a way not seen since World War II.

For the political Left, the return of the activist state is manna from heaven – proof  that they were right all along and that only bigger government can deliver effective action on issues ranging from inequality to climate change.

The neoliberal Right, meanwhile, is on the defensive. Emergency public health measures and financial liquidity injections to fight the effects of COVID have been popular, for good reason, and the public is no mood to listen to warnings that intervention on this scale risks irreparable damage not just to our economies, but to the very fabric of our free societies.

Surely, though, this familiar Left vs. Right argument about whether government should be big or small is now irrelevant: competency, not size, is the measure that matters.

Governments around the world have been severely tested by COVID. China believes its apparent success in managing the pandemic, using measures that many Western societies would never accept, has demonstrated the superiority of its centralized state model over slow-footed democracies. However, democracies like Germany, Japan, South Korea and New Zealand have done well containing the outbreak, while some authoritarian states like Russia and Iran have done terribly.

The US and UK were quick to mobilize the arm’s length financial power of state institutions to stabilize financial markets and cushion the financial damage of lockdowns. However, when it came to more direct state action to tackle the pandemic, it has been a very different story.

Effective response in both countries has been hampered by confusion about how to translate scientific advice into government policy and exacerbated by poor leadership at the top. Both countries failed abjectly on testing, which the World Health Organisation identified early on as vital to bringing the pandemic under control.  This failure has cost a huge number of lives and made it harder to chart a safe path out of lockdown and sustainably revive economies.

In the UK, where a centralized, state-managed health system ought to have provided the levers necessary to move quickly and effectively, the farcical attempts to produce a track and trace app is only the latest of a series of high publicized failures which has left the nation struggling to exit lockdown, and with the dubious of honor of both the highest deaths in Europe and the biggest economic slump.

The reasons for these failures are manifold: a combination of institutional, structural, political, human and managerial weakness. And inevitably, those on the Left appear to blame Right-wing minimal state ideologies, or austerity’s legacy, for starving vital services of resources. The talk now is all about “building back better” post COVID, which will require a more hands-on role for the state. But for this to happen, those who advocate greater state activism must both identify what has not worked and also explain how to make the state more effective and more efficient. This is a perquisite to convince the long-suffering taxpayer to trust the government with more of their hard earned (and scarcer) tax dollars.  And it won’t be easy, as the weaknesses in our governmental institutions exposed by COVID suggest state failure may be deeply rooted.

For one thing, the countries which have fared badly in dealing with the pandemic tend also to lag in other areas where state failure is at least partly to blame. For example, the UK and US have long been poor performers in general levels of education, skills and training and public health.  And both are also outliers at the opposite end of the statistical barbell with leading educational institutions and pioneering achievements in medical and pharmaceutical sciences, while suffering persistently high levels of crime, obesity and poor productivity. They also have outsized dependence on their financial sectors and high levels of social inequality compared with other Western-style democracies.

Like most things in life, simple labels don’t suffice. We need to get away from this false Left-Right dichotomy. Many of the countries which have fared best against COVID have strong and well-run state machinery, but are not left-wing in orientation and embrace pro-capitalist policies.

What societies like Japan, Germany and South Korea have recognized and embedded in their culture and polity is a belief that the state is not something extraneous (or in opposition) to the economy. Rather, they see it as a fundamental part of a well-functioning private sector. The state’s role is not just to provide important functions and services which the market fails to offer, but more fundamentally to enable the market itself to function successfully over the long-term.

This is not as alien to our own societies as it might seem. We once aspired to put a man on the moon and trusted a public agency to deliver on that objective. The early internet was financed by government, while other technological advances including the computer and the jet engine were products of government financed R&D.

“As a society we need to rediscover the value of a well-functioning state. We need to move away from Margaret Thatcher’s hands-off economic ethos, as expressed in The Path to Power, that …government should create the right framework of sound money, low taxes, light regulation and flexible markets (including labor markets) to allow prosperity and employment to grow.”

Simply put, the mantra that society’s ills can be solved by more democracy and less government has proven unfit for purpose. If the UK and the US are to succeed in providing a better future for their citizens, voters need to stop tolerating failing governments that accept poor standards and present limited aspirations.  The role of government must literally be re-conceived around effectiveness, not ideology.

Shifting human behaviors to more sustainable outcomes can be informed by the targets we set for ourselves. Quality, not quantity, is the promise for today’s and future generations. END_OF_DOCUMENT_TOKEN_TO_BE_REPLACED

The recent weakening of the US dollar can be explained by near-term market forces rather than any epochal shift. END_OF_DOCUMENT_TOKEN_TO_BE_REPLACED

Flagging growth, depressed earnings, the risk of rising Covid-19 infection rates and unprecedented US election risk are forces that not even the Federal Reserve may be able to offset. END_OF_DOCUMENT_TOKEN_TO_BE_REPLACED