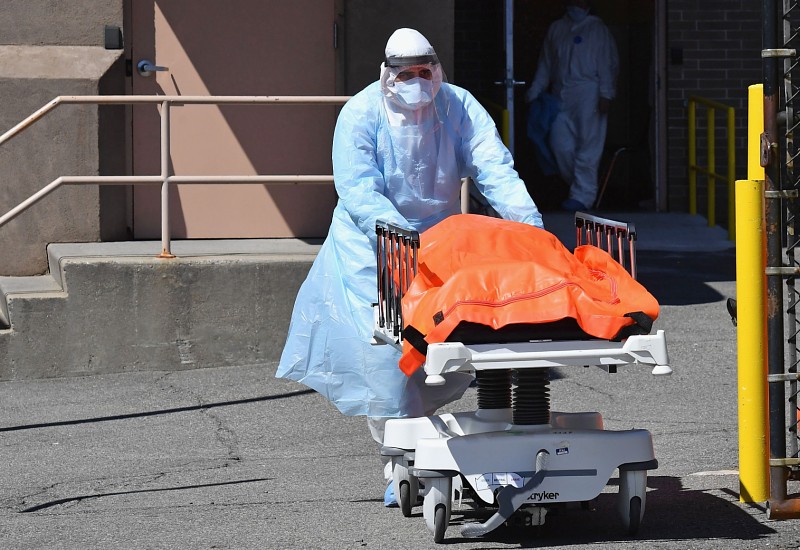 COVID-19 has now killed 200,000 people in the United States. Many Americans – including US President Donald Trump – play down the figure by focusing on victims’ age and comorbidities (which include common conditions such as diabetes and hypertension) and emphasizing that they do not personally know anyone who has died from COVID-19. They seem unwilling to recognize the magnitude of the grief and devastation that the pandemic has caused.

Americans’ desensitization to the pandemic’s skyrocketing death toll vindicates Joseph Stalin’s famous observation: “One death is a tragedy; a million is a statistic.” The danger of this approach, of course, is that it relieves government of its obligation to act – opening the way for far more COVID-19 deaths. So it is worth taking a moment to put this statistic into perspective.

Let’s start with some scale. If 200,000 people stood on one another’s shoulders, they would form a structure that would extend nearly within reach of the International Space Station.

Rarely has a single event – even a protracted war – produced such a massive number of US casualties. In World War I, US military deaths totaled 116,516 – just over half the current COVID-19 death toll. As for World War II, between June 1944 and May 8, 1945, 104,812 US troops were killed in action in the European theater of operations. That includes D-Day, the Battle of the Bulge, and many more engagements.

Since WWII, fewer than 200,000 US troops have died in all wars combined. Think about that for a moment. All who lost their lives in the Korean War, the Vietnam War, the first and second Persian Gulf Wars, the almost two-decade-long war in Afghanistan, and the 20-year-long “War on Terror” number fewer than those who have quietly perished from COVID-19 since February.

Yes, 200,000 dead is a statistic. One can visit any number of COVID-19-tracking websites, and see the numbers tick up in real time. But we must not forget that each time that number rises, someone has lost their mother, father, sister, brother, son, daughter, grandparent, friend, neighbor, or colleague. And someone has lost their life.

Not all deaths from COVID-19 could have been avoided. But the absolute number of deaths need not have reached the level it has. The death of 200,000 people from COVID-19 in the US was a preventable national tragedy.

Those 200,000 people cannot be saved. But the next 200,000 still have a chance. And that is almost exactly how many are at risk of dying by the end of this year: experts predict that, on current trends, more than 378,000 Americans will have died from COVID-19 by January 1, 2021. If regulations are eased significantly – an entirely possible outcome, especially given current desensitization – that figure could exceed 445,000. That is more than all US military casualties in WWII.

Action can and must be taken to spare more Americans this fate. Wearing masks, practicing social distancing, and isolating the infected can save thousands of lives. As individuals, we must use credible sources to educate ourselves and others about the right thing to do. We must then put our knowledge to use and behave selflessly in the interest of the common good.

But it’s not up to individuals alone. US leaders have a responsibility to encourage – and even enforce – such behaviors. Likening stay-at-home orders aimed at protecting public health to slavery – as US Attorney General William Barr recently did – is not only grotesque; it is an insult to all who have died during this pandemic.

US leaders must also fund high-frequency testing with shortened result times. And they must do a better job of educating the public on the efficacy and safety of vaccination, so that when a COVID-19 vaccine becomes available, this deadly outbreak can be brought to a swift end.

Americans cannot just sit back and let COVID-19 kill another 200,000 of their countrymen – or even another 1,000. To paraphrase the poet Dylan Thomas, we and our leaders must not go gentle into that good night. All of us must rage against the dying of the light.

← Taxes and the Markets
Fasten your seatbelts →

Rising nationalism raises a significant risk that the UN system’s structure and institutions, essential but in need of repair and rejuvenation, may instead be left to decline, decay, and even collapse. Such an outcome would be tragic, not just for those institutions but for all of humanity. END_OF_DOCUMENT_TOKEN_TO_BE_REPLACED

America stands at a critical turning point in its history, where the gathering storm clouds of four distinct crises have formed and are converging to threaten the nation. A looming economic crisis, the COVID-19 pandemic, escalating conflicts in America’s great power rivalry with China, Iran and Russia, and rising social unrest within its own borders have combined into a potentially severe stormwall of risk for the United States. END_OF_DOCUMENT_TOKEN_TO_BE_REPLACED

A common misperception is that Democrats are bad for markets. Such fears find little foundation in fact. END_OF_DOCUMENT_TOKEN_TO_BE_REPLACED